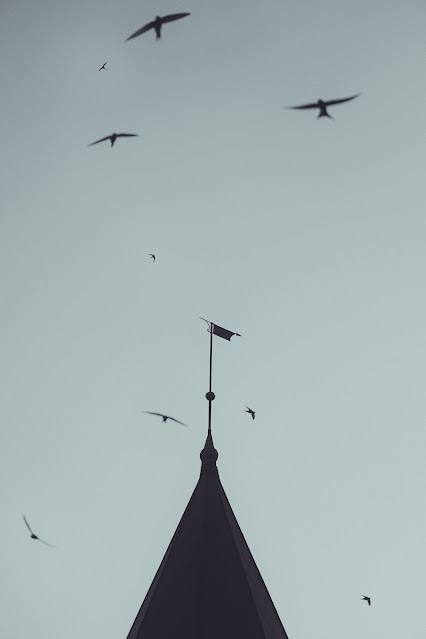 If there’s one bird for me, then it is the swift.

If I am reincarnated, that's what I would opt to be.

They barrel around our summer skies in small flocks, shrieking with delight as if our rooftops are their own personal Alton Towers.  Life through the eyes of a swift must look like one long arcade game.

But maybe being a swift is not such an idyll – every May when they arrive back from Africa, they find it more difficult to nest.

Hundreds of years ago, they nested in vast ancient trees which furnished plenty of nooks and crannies.  However, as mankind has dominated the landscape, they have used our buildings instead, colonising holes, cracks and fissures.

But as our building techniques become better at sealing every chink and gap, swifts find it harder to find a home.  Numbers have greatly decreased and the swift is now endangered in the UK.  However, it is not hard to offer help.

Newbuilds or extensions can have hollow swift-bricks built in.  Existing buildings can have nest-boxes fitted under the eaves.

The church I attend, St Luke’s, doesn’t have much land, but is currently planning a small wildlife garden.  When we talked to Heidi from Herts and Middlesex Wildlife Trust , we discovered we had valuable vertical real estate in the shape of a North-East facing wall, ideal for swift nest-boxes.

So we’ve ordered them now, in time to put up before May.

Let’s just hope the swifts make those lovely excited shrieks when they see them.

For more about helping swifts:

Getting on with it 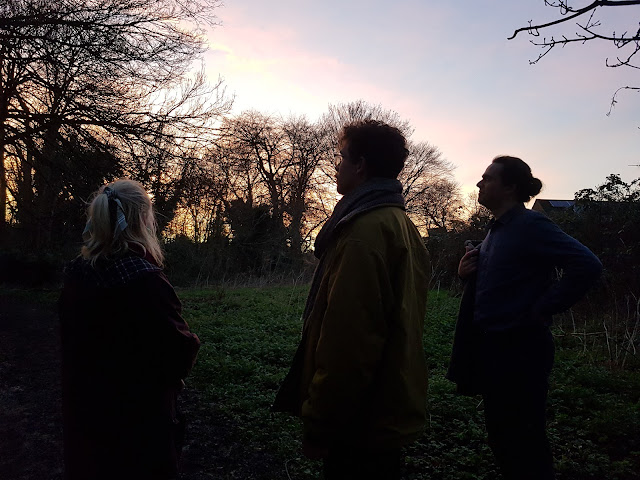 Christmastide has always had the quality of being a magical island, rising above the drab grey seas of midwinter, twinkling with fairy lights and warmed by mulled wine.  Even more so since the children grew up and left home - now it is a time when they return and we re-form the nuclear family we once were.  We do the Christmas baking, read the Night Before Christmas together, watch old films, play daft games and go for endless muddy walks guided home by the glow of early sunsets.

Nowadays, as soon as the last child has left, without waiting for the 5th or 6th of January, I take the decorations down.  I guess it draws a clear boundary between the fresh start of the New Year and the precious island of Christmastide, a country which has sunken below the horizon for now.

But next December, we shall set sail again, navigating towards Christmas, guided by its winking lights and the hope that our children will journey to be there with us once more.

Covid Does it Again 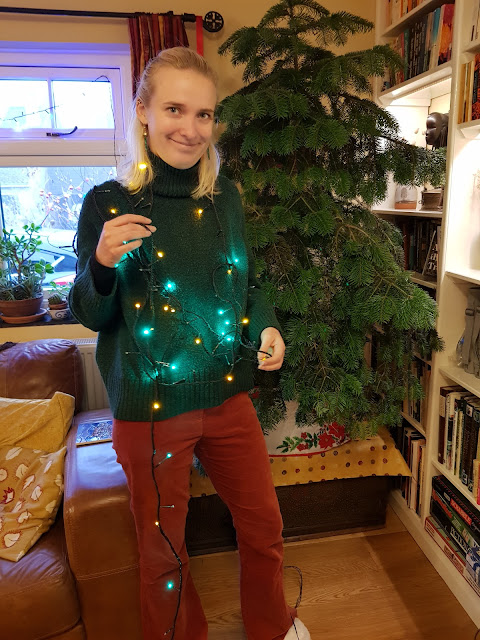 This Christmas is a real cup-half-full/cup-half-empty moment for me.

Christmas 2019:- Nigel, me, Pascoe, Carenza and Perran had assembled at our house, the tree was decked, the food prepped, the gifts wrapped.  But on Christmas Eve, I was felled with a mystery virus, like flu but much worse.  I was out of it until well after Christmas.

Christmas 2020:- Nigel, Pascoe and I had assembled at our house, the tree was decked, etc, then the sudden lockdown eliminated Perran and Carenza from Christmas at home.

Christmas 2021:- seeing the way Omicron was spreading, Pascoe arrived early at our house, then Carenza, although somewhat delayed, waiting for the outcome of one PCR after another (both negative).  We hadn’t even done anything about the tree and food at that point.

We were within just a few days of having the complete family Christmas when a PCR result meant Perran wasn’t coming home after all.

Cup half empty – it won’t be a proper Christmas without him.

Cup half full - we should be able to catch up immediately after Christmas.

How to name a Hedgehog 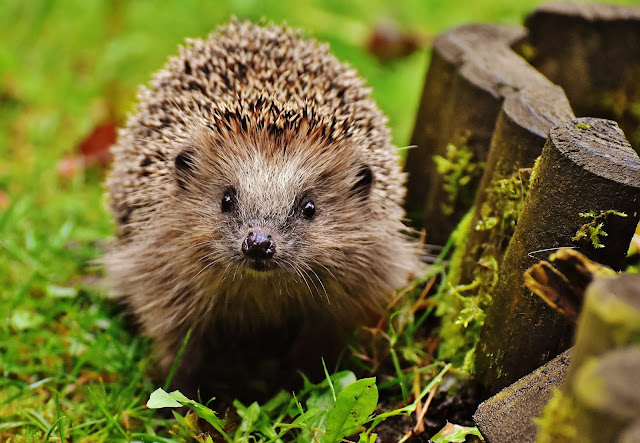 We are sheltering a young hedgehog until it gains weight and can safely be allowed to hibernate.

I am reluctant to name it since it is a wild creature.

However, Nigel and Carenza insist it should have a name.

And that the name must begin with H.

Nigel favours Hodgkins, but it reminds me of Hodgkin’s lymphoma.

Carenza advocates Hannibal, but its far too Silence of the Lambs.

I continue to call it ‘The hedgehog.’

The other evening when Nigel was in a meeting, I went to the bathroom (where its cage is) to give the hedgehog its brimming dish of catfood.

Only to discover that the cage door was open and there was nobody at home.

I stared at the open door catch.  Was this a ‘Clever Girl’ moment as in Jurassic Park when the velociraptor learns how to work doorhandles?

Or was it just another sign of my own decrepitude – had I perhaps failed to lock up after mucking the cage out that morning?

On hands and knees, I peered under every bed, seeking Hannibal-Hodgkins.  But I did not call its name as it would freeze, curl up and go silent. Which is exactly how a wild animal should behave.

And, more importantly, calling its name would also have alerted Nigel to the fact I had let the hedgehog escape.

Eventually, a slight rustling led me to a cosy nook beside the chest of drawers in our room.

With garden gauntlets, I returned the thwarted hedgehog to its cage, and the compensations of  nest-box and catfood.

But I do at least now have a name for it.

Photo by Alexas_Fotos on Unsplash 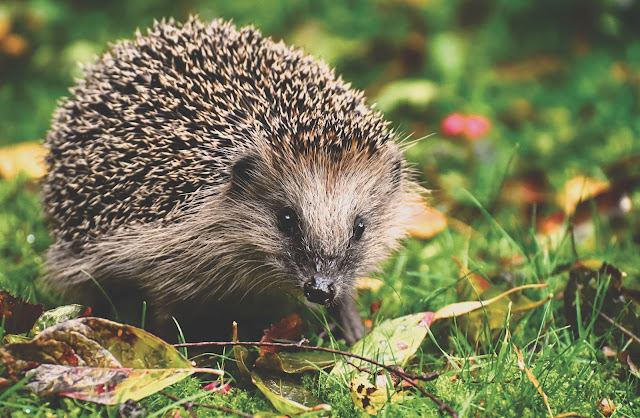 Late on Friday night, Nigel went out to the compost heap, as is his habit.  I know he is having a wee on the compost (‘to nitrogenate it’) but neither of us chooses to mention this.

He was gone longer than usual.  I began idly to wonder if a compost monster had reared up and grabbed him in its grassy jaws.

But no, he burst in saying ‘Guess what I’ve found!’

I accompanied him into the dark garden to find…nothing.

Apparently, there had been a hedgehog snuffling about by the compost bin.  Hedgehogs are not quiet creatures, so we caught up with it by the fence. At first I was delighted but soon realised the hedgehog was undersized – a young one.

We googled the weight at which a hedgehog may safely hibernate – 600g.  Below that, it may well die in its sleep.

We put our young friend on the kitchen scales – 475g.

We would hold onto it until it reached fighting weight and could successfully doze through the remainder of winter.  We had done it once before, a decade ago.

Tricia very kindly lent us a dog crate and Duncan brought it round.  We fussed about hedgehog food and bedding.

Carenza, who had taken charge of our previous hedgehog lodger had another preoccupation –

‘What will you call it?  Hannibal?’

‘Well, I think Hannibal is a pretty name for a boy or a girl.’

But we haven’t named it yet.  After all – it’s not a pet, but a little creature who must be returned to the wild one day.  And that is what we are working towards.

Photo by Alexas_Fotos on Unsplash

I always look forward to one particular Autumn moment – as you walk through a narrow gap between our street and the main road, straight ahead is a beautifully shaped maple tree which turns completely golden, just before its leaves begin to descend.

Last year, the moment never came – a gale stripped the foliage before it had yellowed. But this year it was back in its full glory.

When I went to photograph the tree to send to my children, I discovered something new and even taller growing there.  There is now a huge and hideous 5G telecomms mast sprouting amid the Autumn splendour.

Our neighbours have been fighting this excrescence, although Nigel and I were a little ambivalent since we would appreciate better phone reception.

There is probably Somebody’s Law that where Residents’ Associations are strong, phone masts are few and far between.

However, there’s a rumour that instead of supporting a variety of different networks, this new mast will serve only one, and one none of us uses at that.  If such proves to be the case, it will be very sad indeed as even more 5G masts will need to be built, and we shall not be the only ones with an unwelcome addition to our Autumn treescape.

Out walking at the moment, I am often literally stopped in my tracks by the lavish beauty of the season.

The combination of exquisite leaf shapes and crackling colours sends me creative.  My head floods with ideas and I’m in danger of being overwhelmed and undertaking nothing.

This year I salvaged two quick craft projects from the Autumn parade.  One is to take the prettiest small leaves and press them in old encyclopaedias, as my mother taught me.  In two weeks, they will be ready to glue onto seasonal birthday cards.

The other is to dry hydrangea heads.  Hydrangeas spend the summers putting out innocent candy-coloured flowers, but they take on a more subtle blushing and tinting in autumn.  I have hung them upside down in my larder and when they are dry, they will fill vacant vases round the house.  Dried hydrangeas always remind me of my art teacher who would keep them in her draped and jumbled art room, ready for us to paint a still life.

Whether it is the slight melancholy of the falling season, but carrying out these small acts makes me feel a connection with days and people from my past, a sensation which even as it saddens, comforts.

by liking our Fan page:
https://www.facebook.com/MyMoonShot

Clare Hobba
I am Cornish and have also lived in County Durham, but now I have adopted Hertfordshire as home. I write Historical novels and contemporary short stories. When not writing, I teach Latin to schoolchildren and adults.